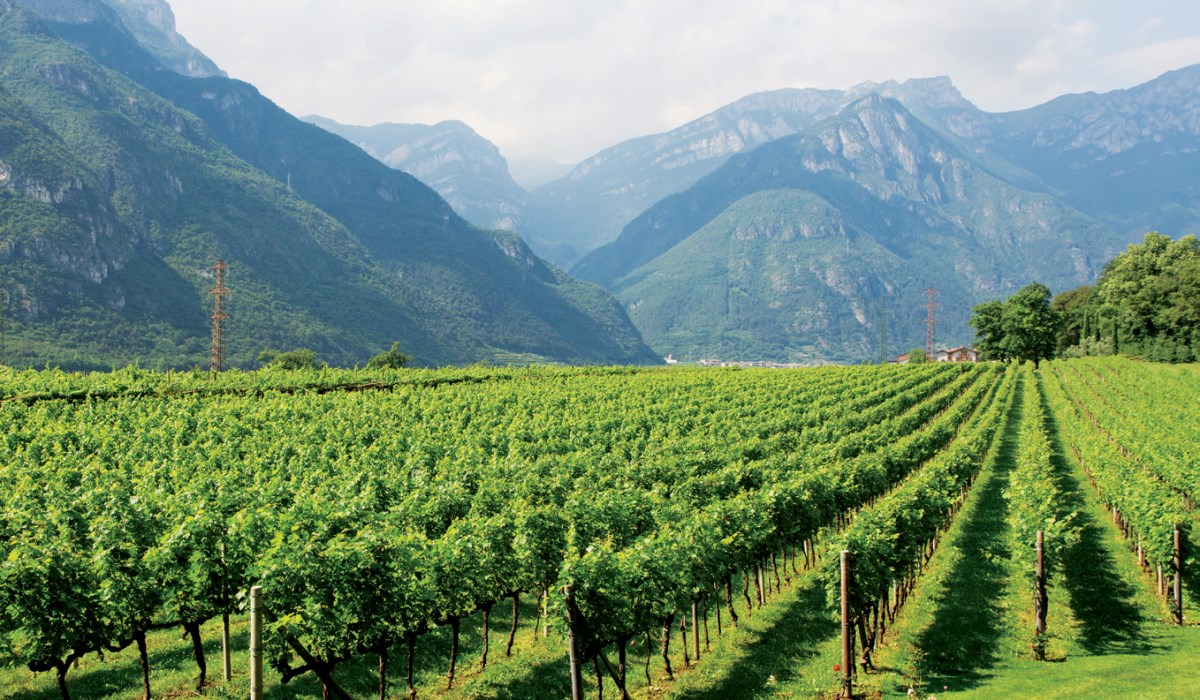 Like tall sailing ships arising from a calm sea, the mountains of the Piana Rotaliana are part of a small section in the Dolomites that hug the sides of a verdant green valley in Trentino Alto Adige.

THE VALLEY FLOOR, a well-worn pathway carved by geologic processes, ice and water, is a patchwork of small towns, historical sites, and of course, viticulture. What makes the Piana Rotaliana so special is not only its staggering natural beauty but how viticulturists have created world-class wines with very little land.

A modest 27 percent of Trentino’s land is arable, making it a drop in the ocean of Italian wine production, producing only 1.5 percent of what is sold commercially.

In Mezzocorona, the Dorigati family makes wine from about 5.5 hectares of vineyards they tend themselves by hand; in addition to about 15 hectares managed by local farmers. Cooperative farming in Trentino is widespread and accounts for about 80 percent of all agricultural practice in the region. The organization of these agricultural cooperatives plays a major role in the economic health of Trentino, shedding a positive light on oftviliﬁed large grower entities.

Another advantage of the cooperative system in Trentino is that the bar is set higher for production standards. For example, while tradition and expertise are of the utmost importance, land stewardship and sustainability are at the forefront of growers’ priorities. Most small vineyard owners choose to grow organically and use ecologically beneﬁcial techniques for fertilization, water management, and pest control. Healthier land means healthier vines, and in turn, better quality wines get made by more producers.

INSIDER TRAVEL TIP:  Mezzocorona is conveniently located midway between Trento and Bolzano where there are charming Christmas markets in December!

Throughout this ﬂat plain, you’ll ﬁnd Teroldego, a local grape variety that makes deep garnet, almost inky purple wines with characteristics difﬁcult to ﬁnd in other wines made in the area. The mineral composition of the well-drained soils, the Pergola vine training systems, and the northern latitude-valley-ﬂoor climate all play a role in how Teroldego makes a big impression with its multilayered dark berry fruit, earthiness and refreshing touch-of-bitter ﬁnish. As any preacher of the terroir doctrine will conclude (me included); Teroldego grown outside of the Piana Rotaliana does not exhibit the same vitality or curious allure as the Teroldego from Trentino.

Food matching to Teroldego is interesting because secondary aromas and ﬂavours vary by producer, based on how they decide to proceed once the grapes reach the winery. Some Teroldego wines are lighter and more refreshing, while others are plush, full-bodied and display herbaceous aromas or notes of licorice.

The lesson here is not to avoid it because you can’t pronounce it or have never heard of it. I recall hosting a small wine tasting for the after-work crowd at a popular retail food shop. I poured Teroldego alongside four or ﬁve other more well-known varieties and guess who was the star of the show? You guessed it; Teroldego was the dark horse because it supplied what a lot of people seek out in a wine. It’s a charmer with complexity, the right amount of fruitiness, great structure, and all the while pleasantly refreshing. While visiting the Trentino region you should definitely try some!

Find a Hotel in Italy

ItalyTravel+More is a private website and blog providing information about travel, culture, and traditions in Italy. Owned and managed by Celia Abernethy. Read more

We want to provide you with quality content. To cover costs, we run ads, sponsored posts, and we are a participant in affiliate advertising programs designed to provide a means for us to earn fees by linking to affiliated sites. Read our discloure and privacy policy.

Do you have an insider tip on travel in Italy or a story to share with ItalyTravel+More? Contact us

Any cookies that may not be particularly necessary for the website to function and is used specifically to collect user personal data via analytics, ads, other embedded contents are termed as non-necessary cookies. It is mandatory to procure user consent prior to running these cookies on your website.