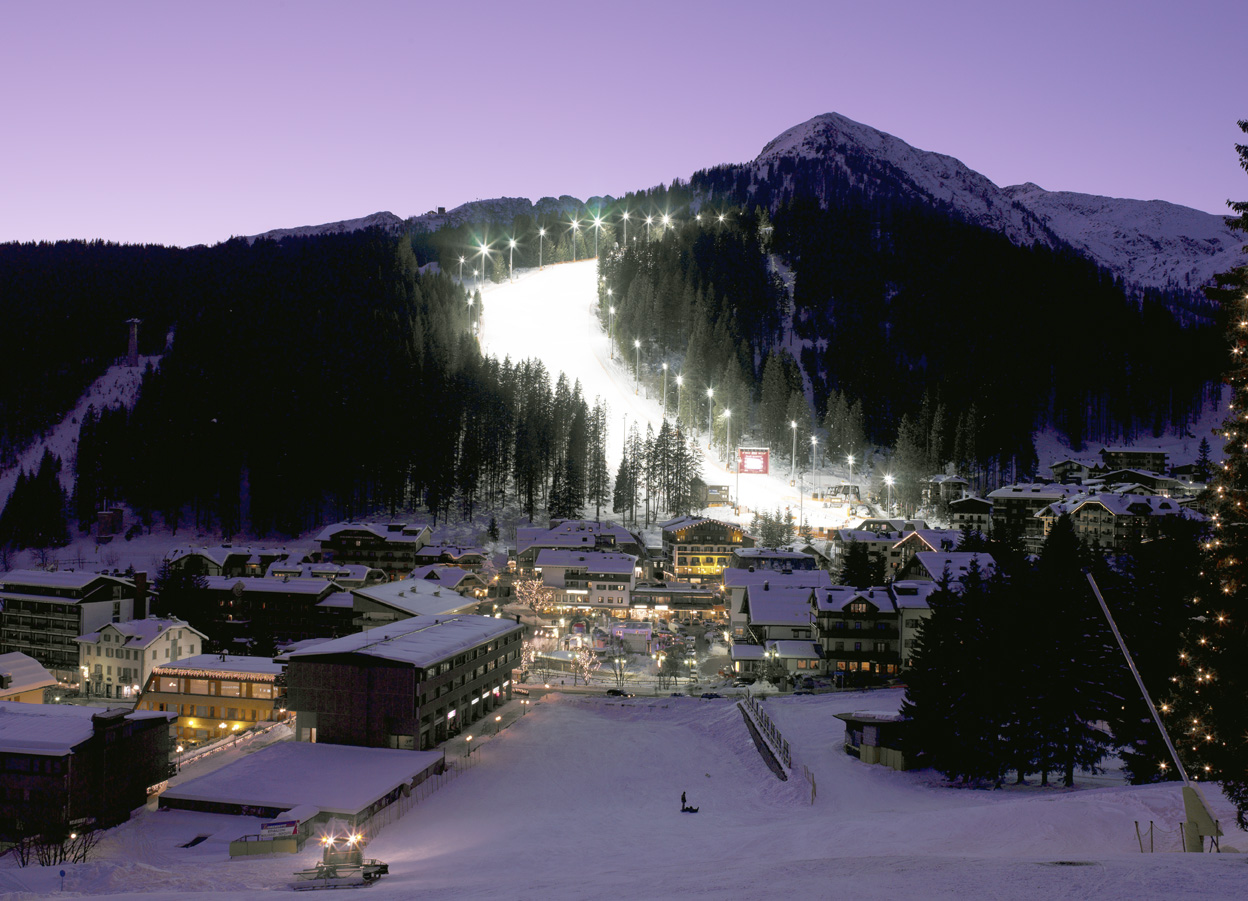 On Canalone Miramonti, the slope of great champions, you can even ski at night!

New at the “starting gate” of the Canalone Miramonti in Madonna di Campiglio, Italy.

From January 19, every Thursday until mid-March, you can ski from 5 PM to 7 PM directly on the same slopes the champions ski at World Cup, open from dusk until the evening for two hours of spectacular skiing.

You can also purchase a direct access ticket to Canalone Miramonti for 15 euro available for boarding the Miramonti chairlift during the two hours of extended opening hours, from 5 PM to 7 PM (17.00 to 19.00).

The slopes which host the Men’s World Cup Night Slalom is lit by a new lighting system and is equipped with an innovative artificial snow system waiting for only those ready for the challenge of this legendary track.

8th edition of the torchlight parade of the Dolomites

The lights of Dolomite’s Fire from Madonna di Campiglio to Pinzolo, at the feet of the most amazing mountains of the world.
The next 11th March the 8th edition of the torchlight parade of the Dolomites will take place, charity event organized by Comitato Dolomite’s Fire.
The idea, born in Madonna di Campiglio in 2009 with the intent to create an event where people aren’t only spectators but first actors, has the goal to collect money for the Fondazione Magica Cleme Onlus which offers help to children and families of Ospedale San Gerardo di Monza and Istituto Nazionale dei Tumori di Milano, organizing for then some recreational activities to face the hardest moments of the disease and the cure.
In 2011 Dolomites’ Fire had conquered the Guinness World Record in the category The Largest Torchlight Parade Multiple Venues, as the most numerous torchlight parade of the world.
This is the spirit which animates Dolomite’s Fire: offering a dream weekend to the young friends of Magica Cleme.
A great national event, with many VIPs, from Cristina Parodi, guest of honour, to the friends of Striscia, Striscia, Edoardo Stoppa, Gerry Scotti, Giuliana Moreira, Capitan Ventosa and Moreno Morello, passing from Benedetta Parodi, Federica Moro and the Iena Gip, to Bruno Bozzetto and Maurizio Nichetti, without forgetting the super champions Gilberto Simoni and Claudio Chiappucci and many others.

Silence. Pristine, white snow. The only sound is the woosh of your skis and a cool whisper of wind. The golden glow embraces you and accompanies you downhill. Be the first to leave your tracks on the slope.
Trentino Ski Sunrise is the skier’s salute to the sun. From January to March, the piste of Trentino will open early at dawn, on Saturday mornings, giving the early bird a chance to experience a unique union with nature, slopes and ski.
Ski-shoeing tours with master guides are also available. Read More

ItalyTravelandMore.com provides marketing and communication for Italy destinations and tour operators. We want to offer useful info and real reviews as if writing to family and friends back home. In order to support the site, we sometimes work with brands but we never compromise our integrity or our users' privacy. Read the disclosure policy below. Contact us for more info

Find a Hotel in Italy

ItalyTravel+More is a private website and blog providing information about travel, culture, and traditions in Italy. Owned and managed by Celia Abernethy. Read more

We want to provide you with quality content. To cover costs, we run ads, sponsored posts, and we are a participant in affiliate advertising programs designed to provide a means for us to earn fees by linking to affiliated sites. Read our discloure and privacy policy.

Do you have an insider tip on travel in Italy or a story to share with ItalyTravel+More? Contact us

Any cookies that may not be particularly necessary for the website to function and is used specifically to collect user personal data via analytics, ads, other embedded contents are termed as non-necessary cookies. It is mandatory to procure user consent prior to running these cookies on your website.